Linda demanded Angela get a bio larger than anyone else and I said ok as long as she did all the work.  Angela will be going on adventures with the team as long as Jack continues to be her handler.  So sit back and learn a little more about her. 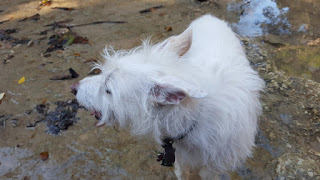 Angela was a two-year-old pupster when Michelle and Linda found her at the Isabel Y. Garcia Animal Shelter in Port Isabel, TX.  Not much of her story is known before then, but it is assumed that she spent her first two years in that coastal town, and at some point had puppies.  Who knows how long she had to face the mean streets on her own, but it does not seem like it was a long time, since Angela still hesitates to venture outside of her home. 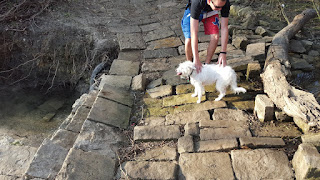 Anyway, Linda and Michelle had been thinking about getting a dog, so when the Laguna Madre Humane Society sent Facebook notices to the community that the Shelter was at overcapacity and would have to start euthanizing dogs, Michelle and Linda headed over.  While looking at some cute “adoptable” dogs, Michelle noticed a big white ball of fur jumping and barking in the distance.  She pointed that big ball of fur to Linda, so they walked over to meet “Angel.”  As soon as a volunteer opened up the terrier-mix’s cage, she came out, rested her front paws on Linda’s legs, and began giving her kisses.  Linda became enchanted by her, so she did not hear the volunteer tell Michelle that “Angel” was in that cage because she started fights with other dogs and so would have to be put down.  Michelle did not tell Linda this, since she felt sorry for Angela, and at the time they had no other dogs in the home.  So, Linda and Michelle walked out of the shelter with “Angel,” who made herself right at home and jumped into the car for a ride. 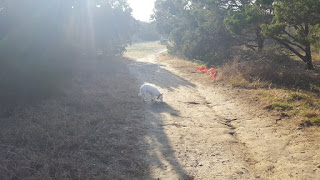 Since Jarrett was far from home due to his job, Linda continued to live with Angela’s grandparents and Michelle for a while.  Eventually, the grandparents got a Chihuahua pup, to whom Angela took a liking.  Then, when Jarrett came to Texas, he brought BeeGee with him.  While the first couple of months were a challenge, because both Angela and BeeGee are alphas, they now seem to get along mostly fine.  Sometimes, they even seem to like each other.  Let’s just say for now that they have a very sisterly relationship. 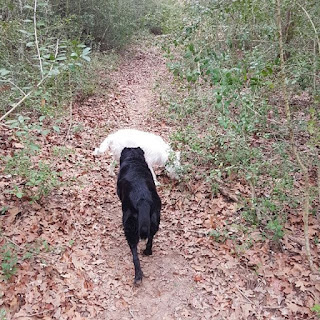 Angela is now seven years old.  In her spare time (which is almost all the time), Angela likes to lay down, chase electric screw drivers, bark at bicycles, get chased, bite BeeGee’s legs, and refuse to eat her dinner until she confirms that Linda and Jarrett will not be sharing their dinner with her.